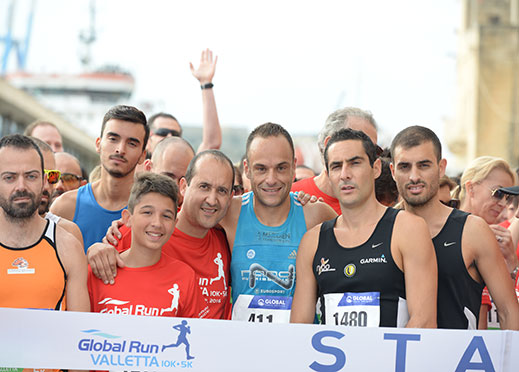 More than 1,000 runners and walkers from Malta and overseas descended in Valletta on Sunday 30th October and discovered the storybook side of a majestic capital that is marking the 450th birthday in 2016, as part of the Global Run Valletta (GRV).

Organised by Global Ports Holding – the world’s largest cruise port operator – the event featured a 10K and a 5K run, as well as a 5K walk that spliced through the stony grandeur of the peninsular city and took off from the magnificent Valletta Waterfront.

The fifth edition of the increasingly popular Global Run series, held in Malta for the first time, built on the successes of the previous four runs - three in the port city of Bodrum (Turkey) and one in Kotor (Montenegro). The Malta event firmly established the series as a Global Ports Holding hallmark celebrating the confluence of tourism and active lifestyle.

This global outlook of the company, owing to its international operations and outreach, was reflected at the Global Run Valletta which ended up attracting over 200 foreigners from 49 countries. The rest of the more than 900 participants were Maltese whose enthusiasm to support the chosen NGO of the Global Ports Holding – Puttinu Cares – ran so high that registrations had to be stopped a week in advance of the race. Puttinu Cares works to support the families and relatives of children battling cancer.