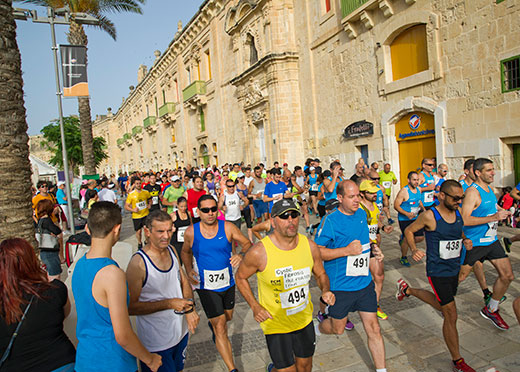 This is part of a world-wide activity, celebrating the anniversary of the Olympic Movement.

The run will start from and finish at the Valletta Waterfront. In order to cater for as wide a sporting population as possible, including non-athletes and individuals who practice running as a hobby, there will be three different distances which participants can choose from, irrespective of age. This event is not a race, and includes a 10K classical run, a 5K relaxed run and 1.5K junior run. Runs start at 7.45am.

Mr Julian Pace Bonello, President of the Malta Olympic Committee stressed the importance of the Olympic Day Run as an event that promotes the role of exercise in society. “Having this year’s event in Valletta presents the perfect setting of natural beauty, culture and physicality, a combination that the participants will surely appreciate,” he added.

“Valletta Cruise Port is proud to be supporting such a prestigious global event. It is meaningful that such an event celebrating the 120th anniversary of the Olympics as revived by Baron de Coubertin known as the “father of modern day Olympics” is being held on Father’s Day starting and ending at Valletta Waterfront,” commented Valletta Cruise Port’s CEO Stephen Xuereb.

Applications are readily available at the offices of the Malta Olympic Committee at the National Pool Complex in Msida, as well as online on www.nocmalta.org. Registration is also accepted on the day of the run between 07.00 and 07.40am.

Organisations are being encouraged to form a team and come along and join in the fun. The MOC will present trophies for groups that bring along the largest numbers in the following categories: School, Local Council, Bank, Club and Company. For recipients of these prizes a group application form must be completed and handed in before the run. A team representative should be nominated to receive prize on the day.

The event is supported by Bonnici Group, San Michel and Windmill Services Ltd.

More information about this event including the run route can be found on: www.nocmalta.org or www.vallettacruiseport.com.