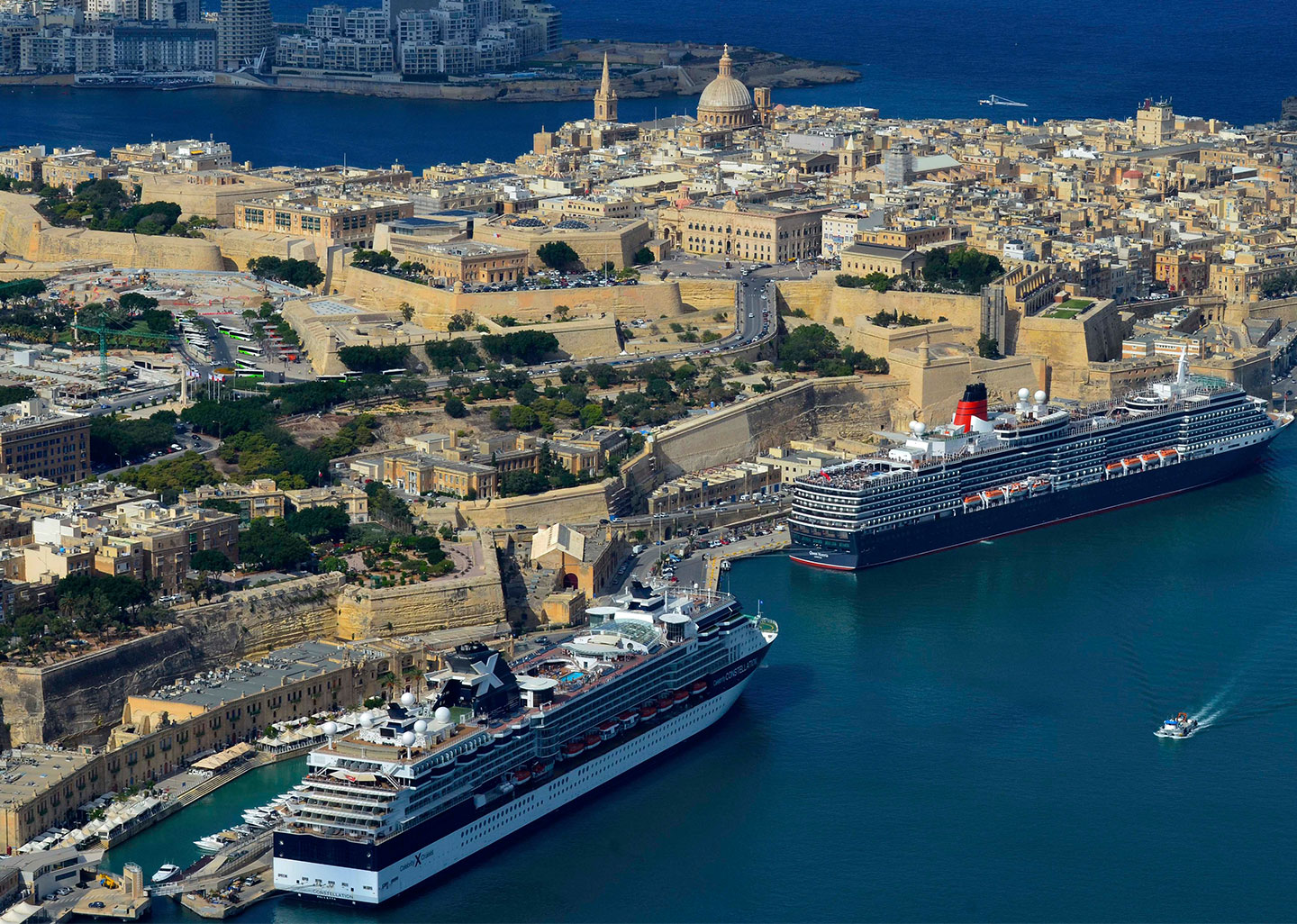 The cruise industry in Malta is going from strength to strength, with a record 820,000 passenger movements expected in 2019, translating to potential direct and indirect expenditure of over €100 million, according to Valletta
Cruise Port (VCP) CEO, Stephen Xuereb.

The reasons behind this industry’s local success are many and include the unique beauty of the Grand Harbour gracing the shores of the capital city, Valletta - a UNESCO World Heritage site, within walking distance from the port - as well as the island’s convenient geographical location. This makes the archipelago appealing for both east and west Mediterranean cruises. “We also have a natural Grand Harbour and we can accommodate all kinds of cruise vessels, from the largest cruise ships to the luxury boutique lines, supported by excellent port facilities,” asserted Mr Xuereb.

A lot is being done to support the burgeoning industry that has seen VCP register an actualised growth of 75 per cent over the 6-year period, from 2013 to 2019. “Investment in infrastructure and service quality has increased.
Airport transfers are faster and more efficient. We have established the Valletta Waterfront as an important – and welcoming - destination for cruise passengers, crew, land-based tourists and locals. Indeed, one of the biggest
achievements over the years was when we received the Europa Nostra Award for Conservation from the European Union. That was a moment of pride because, the iconic Pinto Stores with the coloured doors are now instantly
recognisable and also symbolic of Malta’s Grand Harbour,” Mr Xuereb asserted.

This year, infrastructural improvements will continue as permissions have been obtained to widen the Pinto 4 and 5 quays by 15 metres to allow bigger ships to berth. “With this development we are looking at a more attractive and secure operation,” noted Mr Xuereb. “After all, ships are getting bigger. The majority of the 128 cruise ships currently in the order books for the coming years are large resort ships with capacities of up to 6,000 passengers.”

The focus on culture in recent years, predominantly through Valletta holding the title of European City of Culture in 2018, has also had a positive impact he said. “New events are sprouting in regenerated historic buildings:
from art exhibitions and visual experiences to music, dance, drama, literature, and science”. This has all contributed to “keeping our product fresh for visitors,” he added.

There is a heightened level of awareness with regards to guests and their experience of Malta at VCP. “In fact, I am often asked who our customers are,” revealed Mr Xuereb, “The answer is always the same. Technically, our customer is the cruise line, but we’re also serving their guests. So, the guest experience is as important as the service we give to the ship.”

This is a philosophy ingrained in the entity’s operations, as proven by the accolades recently bestowed on VCP — the awards for Best Terminal Operator by Cruise Insight for the second consecutive year; and Top Rated Mediterranean Cruise Destination by the Cruise Critic Cruisers’ Choice. “This shows that we are being valued by both the cruise lines and their guests. It shows that our modus operandi, our flexibility, our reliability, and our commitment, is having a positive impact,” he added.

This said, naysayers exist too. The industry often attracts criticism that cruise ships only bring business to the operators. In response to this, Mr Xuereb said that “during the 18-year period between 2000 and 2018, according to independent studies, passengers generated €400 million in direct expenditure, while direct cruise expenditure hit the €1 billion mark. The industry is leaving a huge economic impact locally, not just through service to ships, passengers and crew, but also in incoming and outgoing flights through Malta International Airport, as well as hotel accommodation where passengers stay prior to and after their cruise,” the CEO explained.

Moreover, the cruise industry is giving people a taste of Malta that stays with them and sees them return for longer stays, Mr Xuereb emphasised. “While a lot of money is being spent to promote Malta overseas, the cruise industry is bringing 800,000 tourists to experience Malta for the day, and, if we give them a good experience, they go back home, and they promote Malta with their friends. This is of huge value to tourism in Malta.” In fact, it is estimated that more than 80 per cent of passengers, visiting Malta on a cruise, show interest in returning for a longer, land-based holiday, he underlined.

Naturally, there are challenges being faced as well. Environmental concerns and sustainability have become a top priority for governments and policy-makers worldwide, and the cruising industry is taking serious note. Mr Xuereb refers to the Cruise Lines International Association’s report which shows that a large investment by cruise lines of $1 billion in environmental technology will prioritise areas of action, including “air emissions reduction, advanced wastewater treatment systems, solar panels, heating, ventilations and air conditioning systems as well as LNG as an alternative and cleaner fuel.” All of this is working towards the goal to reduce sulphur emissions and keep to the 0.5 per cent global sulphur limit set for 2020 by the International Maritime Organisation in 2016, Mr Xuereb continued.

Beyond all this, Mr Xuereb also added that VCP is in the process of implementing an Environmental Risk Management System which will see an Environmental Committee or a ‘green team’ of leaders and employees assisting
and offering advice on the environmental direction the entity will take. “The aim is to have ‘green port’ accreditations this year. There are also plans to install newly designed canopies which will do justice to the historic fabric of the Valletta Waterfront and its 19 beautifully restored 18th-century warehouses and ancillary buildings,” Mr Xuereb said.

With demand continuously on the rise - “there are about 120 new cruiseship builds on order at the moment -” VCP is well aware of the need for cooperation, Mr Xuereb pointed out. This is where the Malta Cruise Network Forum comes in, bringing together the Ministry of Tourism, the Malta Tourism Authority, Transport Malta, the Malta Police Force, and VCP, amongst others, to ensure that developments and pertinent matters are dealt with effectively.

On an international level, VCP is also supported by Global Ports Holding (GPH), the biggest independent cruise port operator in the world, spread across nine countries and three continents. Mr Xuereb was appointed GPH’s Chief Operating Officer three years ago and is responsible for the operations in 17 cruise ports across nine countries. Mr Xuereb is clear that this partnership offers Malta the opportunity to exchange knowledge and best practices with its peers, as well as to consolidate VCP’s strategic direction. “GPH is a dynamic company, growing strategically whilst keeping its core values of accountability, excellence, respect and valuing teamwork, in all its  ndeavours,” he stated.

Describing global industry trends, Mr Xuereb pointed to the changes in the perception of cruise travel over the years. This year alone, 30 million people are expected to cruise thanks to the varied options and prices on offer. Whereas it used to be considered the purview of the rich and affluent, today the market has opened up to different segments. “It can be the perfect budget holiday. So, if you have a budget, you can also stay on board and
enjoy the facilities; it’s like a floating city so there is plenty to do. Economic downturns, for instance, don’t affect the industry at all,” said Mr Xuereb.

Looking ahead, the CEO noted the packed calendar of events VCP has planned for the next years. "For another year, VCP has teamed up with Valletta Waterfront's catering and retail outlets to organise an eclectic calendar of
events on the shoreside. The calendar is packed with activities for Christmas, Valentine's Day, Carnival, Easter, Halloween... you name it," asserted Mr. Xuereb.

"We also have our own celebrations now. The iconic coloured doors have inspired Colour Fest, which together with the historic Grand Harbour serve as a backdrop for a funfilled weekend in early spring. Maltese Nights are now in their third consecutive year, giving guests the opportunity to engage in traditional folk dancing, or enjoy falconry displays, street games, pony rides, festive village bands and the historic terramaxka street organ. The goal is to have something going on all year round, not just during peak season. We're always pushing to do better," Mr Xuereb concluded.

This article originally appeared in The Malta Business Observer, August 29, 2019.