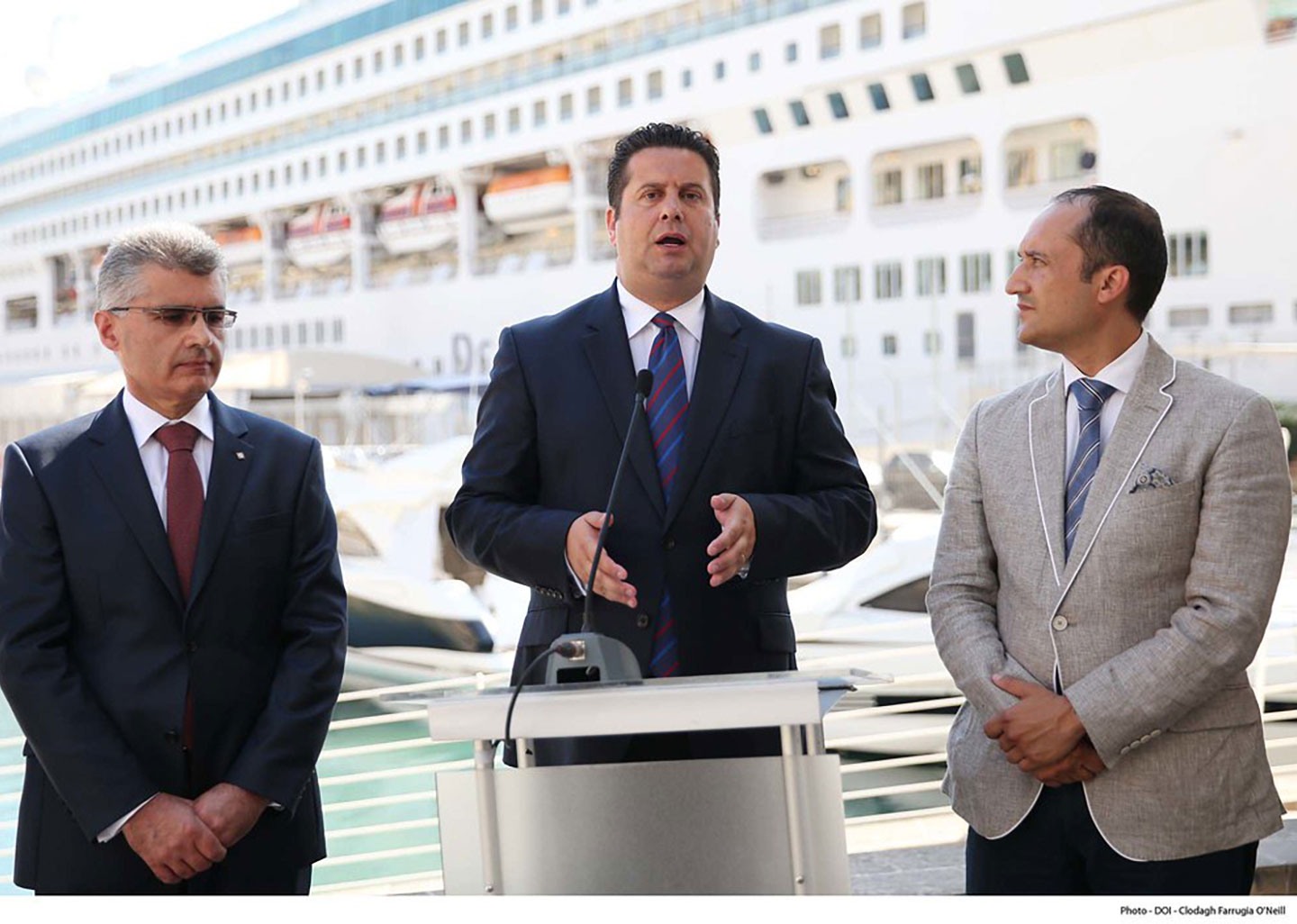 The new Malta to Malta cruise itinerary of P&O Oceana which is due to commence in 2017 was announced during a press conference held at Valletta Cruise Port.

The Minister for Tourism Edward Zammit Lewis explained that this development is exciting for the tourism sector and that he looked forward to enhancing further the relationship with P&O, considered a leader in the cruise industry this year celebrating 180 years of globetrotting adventures.

‘It is primarily thanks to such initiatives that Malta’s cruise sector has been successfully evolving and growing from one which was exclusively a port-of-call, to one which now includes home-porting that benefits the Maltese tourism industry in various ways’, said the Minister for Tourism.

Dr Edward Zammit Lewis further explained that cruise passengers who fly to Malta to start a cruise on a home-porting vessel increase passenger flow at the airport and support airlines in achieving even higher seat factors, thus contributing to the long-term sustainability of the various airline routes into Malta. Furthermore, a number of cruise passengers even opt to add a few nights in Malta before or after their cruise adding further to the economic benefits for all the tourism operators and the economy in general.

The Minister for Tourism also remarked that the cruise market also breathes new life into the Maltese harbours and assists urban regeneration.  He said that cruise liners expose the charms of our archipelago to about half a million cruise passengers every year. Eventually a substantial number of these first time visitors also come back to our Islands for a longer stay, therefore generating even further business.

Furthermore, the Minister for Tourism referred to official cruise passenger data released recently. Everything indicates that the record success registered by the cruise industry last year will continue also into 2016. According to latest published figures by NSO, Malta registered nearly 240,000 cruise passengers during the first half of this year, an increase of 6.2% on 2015. There were 125 port calls between this January and June in our Grand Harbour, 8 more than that recorded in the same months last year. Looking forward, according to projections we will reach the absolute record of 700,000 passenger traffic, an increase of 4.4% over last year.

‘These results reflect the concerted and co-ordinated drive by all stakeholders, including Valletta Cruise Port, Mifsud Brothers Ltd., the Malta Tourism Authority and the Malta International Airport, to develop our product and promote Malta’s increasing attractiveness and popularity as a leading cruise destination in the Central Mediterranean, in what is a highly competitive market’, added the Dr Edward Zammit Lewis.

‘I wish the Captain and crew of P&O Oceana a bright future, and I look forward to our continued and enhanced collaboration for many years to come’, concluded the Minister for Tourism.

‘We are proud to be the homeport of choice for P&O Oceana throughout seasons 2017 and 2018. Malta is a vibrant destination and this is reflected in the port of Valletta and all the ongoing activities around the Grand Harbour region and the Capital City. Valletta Cruise Port prides itself of its close collaboration with all cruise lines. Our distinctive capabilities include a central position in the Mediterranean, sound port infrastructure and services, destination attractiveness and a diverse product offering, outstanding service delivery, and more importantly our reliability and flexibility,’ commented Stephen Xuereb, CEO of Valletta Cruise Port.

Meanwhile Ivan Mifsud, Managing Director of Mifsud Brothers Ltd. (Malta Cruise Services) stated: ‘We are delighted that P&O’s “love affair” with Malta which started way back in 1837 when Peninsular Steam Navigation Co., which started as a mail service from London to Malta has now blossomed to a turnaround operation which will start next year to coincide nicely with the 180th Anniversary since P&O started calling in Malta.'